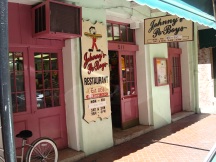 I’ve decided I’m not wild about cajun cooking — if po-boys, gumbos, muffalettas, thick sauces, and such can be called that. However, I am wild about the haute cuisine of New Orleans. The city abounds in fantastic French-inflected cooking: Herbsaint, Lilette, Dick & Jenny’s, Le Petit Grocery, and many others. Tonight and tomorrow night, I’m going to Cochon, the restaurant that Frank Bruni of the NYT ranked second on his list of top ten favorite restaurants in the country. I’ll report on those visits and the one I’ve planned to Le Petit Grocery on Friday night.

For the moment, let’s stick to the food of the people. When I first came to NOLA three years ago (in July, 2006, nearly one year after Hurricane Katrina), I set out to find the best po-boys in the city. Of course I did my research. One friend who’d spent time here recommended those at Mother’s. I didn’t at all like what I ate there. Another friend sent me to Domilise’s (5240 Annunciation St), a shack in uptown on an obscure side street one block up off of Tchoupitoulas Street. The authenticity of its dark, dingy interior was reassuring if not appealing. They fried the shrimp right in front of me. The bread wasn’t great, but I recognized a very good po-boy when I ate it.

I also heard about Johnny’s Po-Boys, on St Louis right off of Decatur. Last year when I walked in to buy something to eat, I turned around and walked right out. The line at the cash register was too long and all the tables were filled. Today, I walked in around 2 pm and had to wait only a minute to order a shrimp po-boy. I stood to the side to watch them prepare the food. Lordy, they make substantial food! Hefty muffalettas, grilled catfish drapped over mashed potatoes and smothered in a seafood cream sauce, big scoops of potato salad, Italian sausages on french bread. Five or six people worked behind the counter but even so it was a ten minute wait at least. At last a woman bellowed the number on my ticket. My po-boy to go was ready.

Was it worth it? Yes and no. I think I can live without eating another po-boy, but this one was pretty good. The batter was spicy and crisp. The shrimp tasted like shrimp. Hot sauce on the table. Not too much mayonnaise, plenty of lettuce, tomato and pickle, crunchy but not ideal french bread. After a few bites, I put it down, opened up the sandwich, and ate the shrimp, leaving the bread on the table. Maybe there are other places that make them better. I’ll leave it to others to find them.