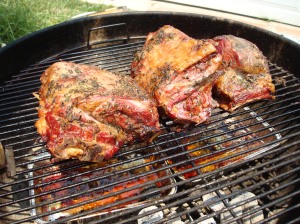 Grilling meat over smoldering coals has turned out to be far easier than I expected. Finding recipes that call for slow-grilling, in contrast, is not. I don’t understand why that should be. Very few of my cookbooks require two, three, four or even five hours of stoking a charcoal fire. So, I am forced to rely on my own feeble powers of invention.

Since I’m a beginner at the slow-grill, I decided several days ago, to keep my first slow-grill lunch party simple. The  decision regarding which meat to cook was easy. I’ve got thirty-five pounds of freshly slaughtered lamb in my freezer, most of which consists of  a surprising number of lamb chops. Heaped en masse, they alone must be nearly the size of a small sheep. And for reasons I can’t understand, I have three shoulder roasts. “Three shoulders?” I asked Sherry. She shrugged and said that’s how the butcher does it. When I opened the butcher paper they were wrapped in, I saw that even the shoulder roasts were little more than uncut rib chops! Are lambs 90% ribs? In any case, I decided to dispense right away with these awkward cuts. The three shoulders were going on the grate.

Now, what to rub on it? Two nights ago, as I watched Gene Kelly cavort with Rita Hayworth in “Cover Girl” (am I the only one who thinks the Rita Hayworth was Kelly’s most ebullient, effortless dance partner? Am I the only one who thinks RH was far more poignant than the legendary MM?), I considered my options. Asian flavors? Italian? For the sake of simplicity, I went with Italian. Rosemary, thyme, and garlic were all I needed. No, I take that back. I had one more thing to get:a barbecue mop. I was thrilled when the UPS man handed me a very large box with a much smaller Steve Raichlen Mop with removable head inside. Armed with my mop, I set to work

All right then, here I go.

Lamb shoulder or leg roast (bone-in, bone-out, it’s up to you)

One bottle of white wine

The day before I grilled, I created a rub of the minced rosemary, thyme, garlic, salt, and olive oil. I smeared it all over the top side of the roasts with the white layer of fat, down the meaty sides and lightly underneath on the ribs. I covered them in a pyrex baking dish and stuck them in the refrigerator overnight.

Because my guests were to arrive at 1 pm, I planned for the roasts to finish about 1:30. Then, I’d let them sit for 15 or 20 minutes. My plan was to roast them in the kettle kept at 300 degrees until the meat thermometer reached 170 degrees. If I put the meat on the grill at 10:30, it should be ready when I needed it.

Putting my pizza stone on the driveway pavement, I set the chimney starter on it. I lit the paper under the coals in it and let it burn until I saw orange embers. That’s when I used tongs (carefully!) to drop the coal brickettes on to the lower grate on either side of a drip pan. I put about 8 on each side and set the lid on it. When the temperature inside the kettle reached 300, I put the meat on the grill, ribs down, layer of fat up,  and hung around the grill to make sure the temperature didn’t rise above. I waited 10 minutes or so, then peered under the lid to see the thermometer inside. If the needle had climbed above 300, I lifted the lid a little higher and waited until the needle dropped. Then I returned the lid.

Back in the house, I poured the bottle of wine in a bowl. I took it and my new mop to the grill. I checked the meat about every 20-30 minutes. I never let the temperature rise above 300. I kept a chimney filled halfway with lit coals. Every time I checked the meat, I dropped one or two on each side.

Unfortunately, the meat was ready before I was. At 12:30, the thermometer read 170 on all of them. So, off the grill they came. I put them back in the baking dish and covered them with foil to sit for 20 mins at least.

If only my guests had been early. Instead, I tore off some of the meat for myself and two carpenters working on my neighbor’s house. They are my witnesses. Gloriously moist, succulent meat that reminded me of my days in Greece — I don’t know what it reminded the carpenters of but they were clearly feeling something equally pleasurable. When my guests sat down at table — and I tried not to hurry the meal too much — the lamb was excellent, but we should have been eating it closer to the 20 minutes the meat spent settling. Timing is all. I served the lamb with Cook Illustrated’s Potato Salad with Dijon Vinaigrette and Fine Herbs (known as the Wedding Pototo Salad because of the copious quantities of it I made at Ann’s wedding in Sussex two years ago) and the Kale ricotta salata salad. For dessert, I served Dorrie’s Summer Fruit Galette, which I was going to post here, but I was not happy with the crust. Another time.