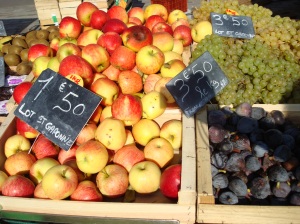 On Sundays and Thursdays along the river embankment, Bordelais food retailers set out their wares in a very pleasant market. I say “food retailers”, because in fact it’s difficult to know who the vendors are. In American farmers markets, there is at least a pretense of small farms and small businesses trying to make a go of it. I have no idea how the market system here works. Some stalls declare they are “biologique,” the equivalent of our “organic.” Most do not make that qualification. Based on my admittedly limited experience here and in Paris, there is not the same value attached to “local” and “organic” as there is in the UK, certainly and most successfully, and in the US.

However, French markets and London markets beat anything I’ve ever shopped at in New York City or San Francisco. You don’t know how good it can be until you go. Cheeses, a plate of fresh oysters for minimal cost, local produce all seem reproducible in the States. But we’re not there yet. Perhaps the farmers’ market at the Ferry Building in San Francisco can compete with London’s Borough Market (even though tourist as it now is), but it would be a very tight race.

The market along the Garonne last Sunday morning was packed with families, dogs, vendors and sunshine. My kind of market. I was trying to think whether dogs were allowed at my local market. I don’t think they are. But we’re getting better at producing our own cheese. Oh, that we could replicate in our own special North American way the abundance available here in Bordeaux!