The four days I recently spent in Los Angeles in the company of Ava, a two-year-old from London, forced me to adjust everything I thought I knew about the city without having ever spent time there at all. It was nothing like what I expected. Before I flew down there, I imagined that LA would resemble Phoenix and Scottsdale, Arizona — miles and miles of wide traffic-clogged boulevards, malls, and pre-fab modern architecture. The traffic turned out to be as bad as I expected, but not much else.

I spent the first afternoon there driving around Venice Beach, Santa Monica, Santa Monica and Sepulveda Boulevards, and Westwood (I think).  The following days I headed east. The surface of the city is far grittier, older, more ethnic, and stylishly cool in an unassuming way than I had imagined. Instead of looking like what Rodeo Drive alone turned out to look like, the streets seemed stuck in the 1970s. LA is one big badly run-down 70s retro set. 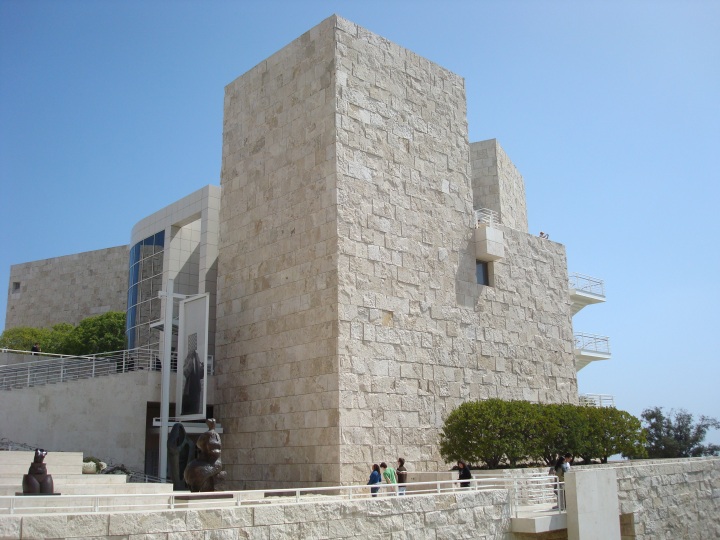 But I can see why designers like Los Angeles. A good proportion of the store-front signs date back 30 years or more. I saw a lot of interesting architecture in residential areas. At one point when I was chauffering three art historians and Ava east along Olympic Boulevard, I thought we had gone back in time or mistakenly driven into a movie studio lot. On Broadway in downtown LA, the narrow canyon of buildings, the ornate decoration on the many theaters lining the street, and the small-scale feel of the street brought all of our faces agape in wonder to the car windows as if we had inadvertantly turned on to a New York City street in the 1940s. Another day we went to the Getty Center, glorious, light-filled structures made of blocks of yellow stone that evoke the monumental walls of Jerusalem. Blue-green vistas through white geometric portals everywhere you turn.

That night, we tried a Mexican restaurant that the fanatics on chowhounds.com discussed. I won’t mention the name of the place, since this blog is not about trashing restaurants. I’ll say only that this eatery on Olvera Street (one among several there) made great tortillas. That was about it. A one-trick pony. The lesson we learned was: beware the recommendations on chowhound.com. Enthusiasm gets the better of people’s judgment.

The next night, we made better use of Chowhounds. La Flor de Yucatan, a bakery that sells prepared food as a sideline on Hoover Ave. sounded appealing. But like a lot of Mexican places in LA, they close at 8 pm. That meant driving out there in rush-hour traffic, which only goes to show how obsessed foodies can be when they’re on the hunt. Now down to Ava and one art historian (her mother, Ann), I drove again east on Olympic Blvd and turned right on Hoover. When we had nearly come to I10, we saw the funky bakery with the hand-painted sign on the east side of the street. It was already dark. Ann jumped out and disappeared into the store. Minutes passed. Ava fell asleep.

Twenty minutes later, Ann emerged only to tell me that the woman behind the counter was preparing take-out boxes of cochinata pibil and another dish that consisted of tortillas dipped in pepita sauce and filled with chopped hard-boiled egg, along with hot fresh tortillas. I went into the small store. The baked goods and cakes didn’t look nearly as appealing at the display of sample dishes on a small table in front of the pastry case and cash register. Getting the food boxed and bagged took forever. In the meantime, we bought soft blocks of achiote paste and relleno negro (blackened chili pepper paste) to take home.

Once the food was ready, we raced west along the I10 to our hotel in Century City. We gobbled down the delicious shredded pork of the cochinita pibil. The egg-filled tortillas were good, but not as interesting.

The woman in the store says a lot of foot traffic comes her way from Chowhounds. I can understand why. I wish we had had the time to explore the other places we saw (El Taurino on Hoover looked worth a stop). I’ve many reasons to return to LA.